Opening in theaters and VOD May 7
A young woman (Maya Hawke) thinks she’s found a path to internet stardom when she starts making YouTube videos with a charismatic stranger (Andrew Garfield) – until the dark side of viral celebrity threatens to ruin them both.

Maya recently appeared as Annie on the Showtime series The Good Lord Bird. Check out the screen captures of Maya in episode five, Hiving the Bees.

Hi, Maya fans! I apologize for the lack of updates this year. The gallery has been updated with Maya’s photoshoots, photos from films, and more! 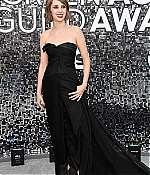 “Once Upon a Time in Hollywood” Los Angeles Premiere

Hi Maya fans! I’ve added some photos of Maya attending the Once Upon a Time in Hollywood Los Angeles premiere in Hollywood, California (July 22).

The Stranger Things actor has officially snatched the elusive “breakout star” label—but what does that really mean?

GLAMOUR – To quote Jane Austen, it is a truth universally acknowledged that a TV series in possession of 40 million viewers and a 93% score on Rotten Tomatoes must be in want of a Breakout Star. And for Stranger Things‘ season three, that chosen one is Maya Hawke. As Robin, the witty Scoops Ahoy coworker of Steve (Joe Keery) and the first openly queer character of the series, Hawke stands out—not an easy feat in a cast that includes David Harbour (who plays Jim Hopper), Winona Ryder (Joyce Byers), and Millie Bobby Brown (Eleven).

Another truth: The internet couldn’t have picked a better queen. Hawke, the 21-year-old daughter of Uma Thurman and Ethan Hawke, has the kind of coolness only someone who grew up in Manhattan with celebrity parents could embody. While that might manifest as intimidating or cold in others, Hawke is surprisingly approachable and energetic. And for her, being labeled the latest It girl or a breakout star is not an achievement worth putting stock into—which, of course, only makes her cooler.

“I really haven’t been paying attention to the headlines,” she tells me on the set of her Glamour shoot. “I was so scared of the fact that Stranger Things has such a wide audience that I’ve tried to duck out of paying attention to people’s reactions. The chance of people hating me in that show was just as high as people liking me in it, so I just thought I didn’t need to receive the ego boost or the ego destruction.”
END_OF_DOCUMENT_TOKEN_TO_BE_REPLACED

Role: Robin Buckley
When a young boy disappears, his mother, a police chief and his friends must confront terrifying supernatural forces in order to get him back.
Official Photos IMDB

Site Name: Adoring Maya Hawke
Site Domain: MayaHawke.net
Since: 2018
Header: Kaci Elizabeth
Host: WHP - Privacy Policy
Privacy Policy
6 Users Online
Photo Archive Hosting over 7,000 photos!
Adoring Maya Hawke is an unofficial and non-profit fansite dedicated to Maya Hawke. I am not associated with Maya or her management. All information and material found on this site is for entertainment purposes only. I do not claim ownership over any images or media found at this site. All material is copyright to their respectful owners and no copyright infringement is intended.